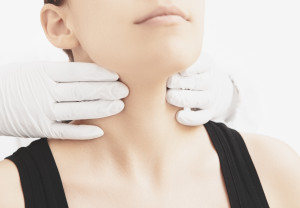 Elizabeth is a hardy, healthy small business owner known for her creativity, drive and sense of humor. In the last 2 years she has gotten pregnant easily; but has had 3 miscarriages, each early within the first trimester. Her medical doctor had attributed her pregnancy losses to advance maternal age. Following the last miscarriage, she began noticing that her energy level seemed inordinately high, even after 12 hours of hard work. She also began spontaneously losing weight. This pleased her; but it was peculiar that neither her diet nor activity level had changed.

Next she started experiencing heart palpitations and feeling as though her insides were quaking. Friends and family dismissed it as anxiety, overwork and stress, though Elizabeth is not an anxiety prone woman. These symptoms culminated in awakening one morning with double and blurred vision and a headache so severe that she could not drive or function.

It turns out that Elizabeth has Hashimoto’s disease-an autoimmune disease of the thyroid. Autoimmune means that the body attacks itself or identifies its own tissue as foreign. It is important to realize that with Hashimoto’s disease, women can have fluctuating bouts of BOTH Hyperthyroid (fast/overdrive) and Hypothyroid (slow/sluggish) symptoms.

For some women, the symptoms change rapidly from week to week.

Hashimoto’s disease is complex with regard to how it disrupts fertility and can contribute to recurrent miscarriage. During hypothyroid bouts, the disease impacts progesterone production. During hyperthyroid bouts, the disease imparts extreme inflammatory stress and temperature fluctuations. The matter is further complicated by the fact that some women have the commonly checked TSH blood level (Thyroid Stimulating Hormone) registering within “normal” ranges; yet they do have Hashimoto’s disease. For your review below are listed typical Hyperthyroid and Hypothyroid symptoms.

By the time Elizabeth saw me for acupuncture, she was physically and emotionally drained.

I was stunned to find that nowhere along her course of evaluation were blood levels for antibodies drawn. This is a must. Labs called Thyroid Stimulating Hormone Antibodies (abbreviated TSH Ab), had been drawn to rule out Graves Disease. These were indeed negative for Elizabeth; but she still had Hashimoto’s.

There are two basic and inexpensive antibodies blood tests, which should always be checked when there is a question of thyroid disease or Hashimoto’s. In my practice, I routinely order these markers. My patients pay $29 for each test plus a $7 lab draw fee.

Elizabeth had extremely elevated numbers of both Thyroid Peroxidase Antibodies and Thyroglobulin Antibodies.

Conventional medicine does not typically recognize steps, which autoimmune patients can actively take to attempt to quench the inflammation that occurs within their bodies due to autoimmune thyroid issues. This may be one reason why antibody draws are often not completed. The conventional medicine tack that is frequently taken is that the thyroid will eventually be burned out, so to speak, by the body’s repeated autoimmune attacks. Then the woman will simply be on thyroid hormone supplementation for the rest of her life.

What about the woman’s body, mind and spirit weathering the extremes of these overdrive states? What about the physiological impacts to a woman’s overall health during these flares? Any woman who has ever experienced this phenomena will tell you she wants options.

In addition to seeking medical care and acupuncture, here are some things you can do to take care of your own thyroid if you have or suspect you have Hashimoto’s disease.

By following these self-care measures, you can assist your body in more optimal hormone regulation and reduction of inflammation, so as to improve your chances to fall pregnant.

First of all: See an Endocrinologist and Acupuncturist

Have the appropriate labs assessed and interpreted to determine the function of your thyroid.

Cut Out Gluten From Your Diet – FOREVER

This is a strong statement, I realize. There are voluminous amounts of evidence that gluten is akin to gasoline on the fire of autoimmune issues. Sometimes my patients will say to me “Can’t I just have a slice of birthday cake once a year?” Please note: one exposure to gluten revs up your immune system for up to 8 months. One slice of birthday cake could have long standing impacts to your thyroid, causing a flare.

An autoimmune thyroid flare can in turn cause your body to attack your thyroid.

You have power within your habits to attempt to preserve your thyroid’s function. Avoiding gluten is one power you can exercise.

This may seem counter intuitive. From a biophysiology standpoint, the body does need iodine. However iodine stimulates increased production of Thyroid Peroxidase (TPO). For a woman who has antibodies (Thyroid Peroxidase Antibodies TPO Ab) to her own TPO, a surge in TPO production can cause flares. Sea salt is fine. Cook your own food as much as you can.

The other iodine warning is to avoid, if possible, scans requiring use of intravenous iodine based dye. Patients generally must sign consent for the iodine contrast dye to be used. Chemically flooding your system with an iodated dye can do exactly the same thing as iodated salt. However a contrast dye injection is in far greater quantities and infused directly into your blood stream. With any testing procedure, you all must weigh the pros and cons. Actively consider these with your MD, should it be necessary for you.

Increase Antioxidants in Your Diet and With Supplementation

anti-aging protocols. If you have Hashimotos disease or suspect it, your body will use antioxidants to quench that flaming fire of inflammation caused by the autoimmune response. The great thing is that antioxidants are abundant in green leafy vegetables, they are widely available as supplements, and there is plentiful information about them on-line. Adding Omega fish oils 3,000mg per day is enormously helpful for generalized inflammation and the side benefit is that it benefits your cardiovascular system.

In my acupuncture clinic, I specialize in the treatment of fertility of both men and women, women’s health, and functional endocrinology. More of my fertility patients have thyroid issues than those who do not; so this is a treatment passion of mine. Drawing from my 20 years of experience as an ICU RN, I make extensive use of lab testing. I also utilize acupuncture, antioxidants, dietary changes and nutritional supplementation to optimize health, wellness and vitality for the amazing women and men who I have the great honor treat.